This is a place to share words (that may or may not be published elsewhere).They may have new information or a different way of understanding ideas that are important, maybe they express something about the world in a particularly effective way. We can only post stuff here that is copyright free or has a creative commons licence as Words and Actions is not commercial.

Ten Days of Prayer for Peace in Nagasaki July 7 2019

On February 25, 1981, Pope St. John Paul II made a striking peace appeal in Hiroshima. In response to that appeal, since the following year the Japanese Church has annually marked the Ten Days of Prayer for Peace August 6-15 to think about and pray for peace. Pope Francis will visit Japan in November this year, 38 years and 9 months after John Paul’s Hiroshima Peace Appeal, and we look forward to his sending a new peace message to the world. 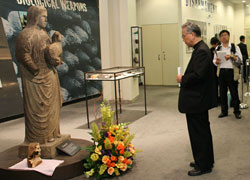 Since becoming pope, Pope Francis has from time to time made remarks regarding peace and the abolition of nuclear weapons. On July 7, 2017, the UN General Assembly adopted an historic Treaty on the Prohibition of Nuclear Weapons. On the previous March 23, the pope delivered a message to the UN General Assembly. Terrorism, conflicts among those with different military power, security of information, environmental issues, poverty etc. are intertwined in a complex way, threatening the peace and security of the modern world. However, nuclear threats cannot respond effectively to such issues. Stability based on fear simply increases fear and compromises trusting relationships among nations. In that case, we must ask ourselves how stability can be maintained. “International peace and stability cannot be based on a false sense of security, on the threat of mutual destruction or total annihilation, or on simply maintaining a balance of power. Peace must be built on justice, on integral human development, on respect for fundamental human rights, on the protection of creation, on the participation of all in public life, on trust between peoples, on the support of peaceful institutions, on access to education and health, on dialogue and solidarity.” The Vatican was one of the first three countries to ratify the Treaty on the Prohibition of Nuclear Weapons (September 20), and in November sponsored a conference on nuclear disarmament: “Perspectives for a World Free from Nuclear Weapons and for Integral Disarmament”.

According to Pope Francis, “the integral development of all people” means that there are no economic gaps or exclusion among peoples, no one is excluded from society and everyone can participate. It means that the economy, culture, family life, religion, etc. that are essential for human growth and development are secure, that the individual is a freely involved member of the community under God. A peace which is not “the result of integral development” will be doomed (Apostolic Exhortation Evangelii Gaudium, 219). Therefore, in order to build and secure peace and security in the world, it is necessary not only to eliminate the nuclear threat by abolishing nuclear weapons, but at the same time to make all people richer in all aspects.
With Pope Francis, we wholeheartedly pray to the God of peace that we can build peace by being deeply involved in the integral development of all while seeking the realization of the abolition of nuclear weapons. Let us begin that task by doing whatever we can.

New Zealand: Addressing Humanitarian and Environmental Concerns of Nuclear Veterans and the Impact of Fallout from French Pacific Nuclear Tests

Between 1952 and 1958, Aotearoa New Zealand military personnel participated in nuclear weapon tests carried out by the UK and the US, in Australia and Kiribati. writes Mathew Bolton Members of Aotearoa New Zealand’s armed forces were also exposed to radiation during the Allied occupation of Japan following the atomic bombing of Nagasaki and Hiroshima, and later, when protesting against France’s nuclear testing in French Polynesia. Aotearoa New Zealand nuclear veterans claim that their health, and their descendants’ health, were adversely affected by exposure to ionizing radiation. Their concerns are supported by independent medical research. The 2017 Treaty on the Prohibition of Nuclear Weapons (TPNW), of which Aotearoa New Zealand is a state party, obligates assistance to victims, including veterans, and remediation of contaminated environments. The International Campaign to Abolish Nuclear Weapons (ICAN) was awarded the 2017 Nobel Peace Prize for the role of its advocacy in achieving the treaty.

A new report from Pace University’s International Disarmament Institute documents the humanitarian, human rights and environmental harms of nuclear weapons use and testing to the people of Aotearoa New Zealand, finding that:

The report recommends that Aotearoa New Zealand should: