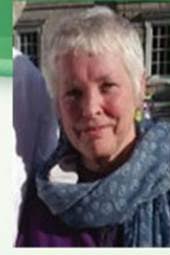 I am a Quaker feminist from Scotland, and I lived in Ireland when my children were small. My working life was in the theatre and community arts, mental health support and advocacy and community development.

When I retired from full time work, I continued support work part time, and worked part time as Co-ordinator of the Edinburgh Peace and Justice Centre (P&J) , collaborating with others on issues around nuclear weapons and International Humanitarian Law. I also engaged in activity with the new devolved Scottish Parliament. I actively support Scottish independence in order to create a peaceful and nuclear free Scotland. I am a member of Trident Ploughshares.

I still undertake some support and advocacy work, and I have lived in community at various times in my adult life and I lived and worked for two years in a therapeutic community as a co-worker.

I am a young passionate feminist, and I was born and raised in Edinburgh.

eaving school at 16, I spent 5 years working in finance before travelling to Australia to live and work for a year. I spent the majority of my time there fund-raising for Amnesty international, The Cancer Council and The Australian Conservation Foundation.

In my late 20’s I decided to take the plunge and re-enter into the world of education. After completing an access course at Newbattle Abbey College, I was accepted to study Philosophy and Politics at Edinburgh University. In my final year at university I became passionate about nuclear disarmament and began interning for the International Campaign to Abolish Nuclear Weapons. Through the course of my internship I became a member of the Women’s International League for Peace and Freedom, and of Scottish CND.

Since completing my degree, I have been employed by Edinburgh University with their Accommodation Catering and Events team and I am still involved in Words and Actions in a campaigning and administrative capacity, through development of Indycan and supporting ICAN activity in Scotland.

Since retiring from the formal education sector, where I was a secondary school teacher, a curriculum

adviser and latterly an education officer, I have made a range of voluntary contributions to the peace movement, principally with Trident Ploughshares – the non-violent direct action campaign against nuclear weapons, where my work has included media, event planning and newsletter editing.

I am also involved with Nukewatch – the citizen network which monitors the movement by road of the UK’s nuclear weapons. With Nukewatch my work has included monitoring, monitoring co-ordination and co-authoring the 2017 publication Unready Scotland.