Covid-19 has already contributed to renewed calls for a ceasefire at the highest transnational level. We have seen how quickly people can learn to make changes and sacrifices for the common good when the changes required come from evidence-led policies and are made unambiguous. 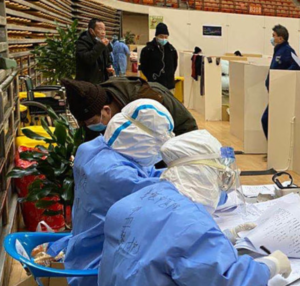 Movements to build back better, initiate a well-being economy and tackle the climate emergency as the urgent exisetential crisis that it is are growing and vocal. That’s the good news. But some reports from Syria about how the crisis responses are being delivered sound similar to the situation during the Irish famine when soup kitchens were set up at the top of the hills (people died attempting to reach them on foot) where recipients were fed. Border checks are stopping the movement of more than the virus at troubled hot spots, and preventing access to countries lke the UK by people who are deperately in need of more than hand sanitiser.
Civil society participation in diplomatic efforts can attract far more engagement by zoom than by easyjet, but in some of the most difficult diplomatic efforts, the impact of face to face quiet processes cannot be underestimated. Emergency legislation is being introduced rapidly, and with good reason, but may well be utilised now, or further down the line to limit remedy to our fundamental human rights. May we move forward with compassion and care.

View all posts by Janet Fenton